Pythons in Our Midst

Pythons in Our Midst 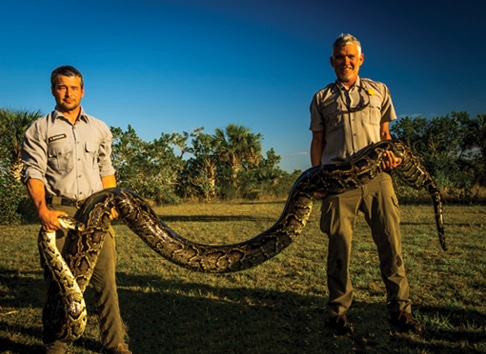 Big Cypress National Preserve is a sprawling 729,000-acre wilderness that is crawling with invasive Burmese pythons eating their way through native wildlife.

How many are there? No one really knows, said National Park Service Biologist Matthew McCollister. What is known: As the population proliferates, these exotic reptiles that can grow up to 170 pounds are expanding their territory and a $30,000 grant from the Community Foundation of Collier County is helping McCollister and his team to track reproductive females through the Scout Snake Python Program.

The grant was provided to the Alliance for Florida’s National Parks, the philanthropic partner for Florida’s four national parks. Big Cypress is collaborating with the U.S. Geological Survey and Conservancy of Southwest Florida to understand python behavior and build on research to improve their collective understanding of these hardy reptiles that have cozily adapted to the South Florida backcountry. The program is a costly, labor-intensive endeavor that entails tagging adult males and females with radio transmitters and tracking them on the ground during breeding season with aerial telemetry support to pinpoint the pythons’ location in the vast wilderness.

These creatures blend seamlessly with their surroundings, making them difficult to hunt, so the tagged snakes are the “scouts.” Because the transmitters are limited in their range, air support guides McCollister on the ground to their location, which takes him to the preserve boundaries and through challenging terrain. “Without the airplane, I don’t know if we could do it at all,” McCollister said. “The airplane increases our capacity exponentially.”

And that’s just the beginning. Often, several males are drawn to reproductively mature females, which are typically euthanized and sent to undergo a necropsy so scientists can better understand their diets and other factors. When he needs to, McCollister also processes some in the field. Some are captured to undergo surgery to implant a new transmitter. “Nothing gets released without a transmitter,” he said.

Wildlife officials across the board have been sounding the alarm about the python invasion and are trying to tackle the issue through an array of tactics. However, McCollister said, not enough is yet known about the snakes’ bio-rates, such as the survival rates of eggs, hatchlings, and adults and reproduction age. One female in the Big Cypress was documented with 20 hatchlings in one breeding season, which runs December through March. The snakes are two feet long when they hatch, McCollister said. Researchers know that pythons “are thermally and metabolically efficient,” McCollister said, and are thriving in the Everglades and moving as far north as Lake Okeechobee.

McCollister said an adult may snack on small mammals, such as rats and rabbits, or gorge on one large meal once a year. They can eat prey, which they squeeze to death, that is larger than their physical size and have been known to take on sizable alligators. It’s extremely common to find deer hooves in their digestive tracks, McCollister said. The pythons “will be here for a long time and there’s a lot to learn and improvements to be made” in controlling their population before they knock the natural ecosystem out of balance. “We run this program efficiently and stretch every dollar,” he said. The Community Foundation’s grant “gives us flexibility so we have more operating capacity. Our aerial telemetry operations are a critical piece of this fieldwork.”